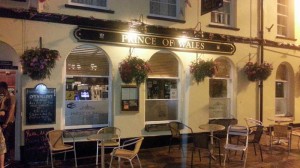 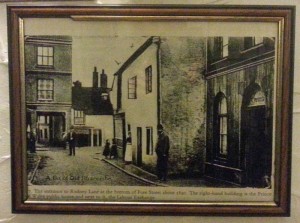 The entrance to Rodney Lane at the bottom of Fore Street about 1890. The right hand building is the Prince of Wales public house and next to it, the labour exchange.

The Prince of Wales on Fore Street is the second oldest pub in Ilfracombe, although the building is older than the George next door it was not always a pub.

There are low beams which are original and very quaint unless you bang your head on them. A photograph on the wall depicts the pub in about 1890 at which time it was smaller, and set back from the street.

There were two ales one was Doombar but I had the other one which was very nice and £3.10 but I have forgotten what it was so will have to go back and check.

The Prince has a terraced garden at the rear, there are quite a few steps.
There is also a cash machine here but it charges for withdrawals which I object to. However the nearest one is at the top of Fore Street so you may prefer to pay the extra if you don’t want to struggle up the hill.

Back to Ilfracombe pub listings