Another fabulous fun filled weekend at the Landmark

This is going to be one of them there “work in progress” type posts.

So many great acts to review, so many photographs to crop and compress.

First off, and simply because I happened to be going through the pictures of them just now. The Liquidators AKA. 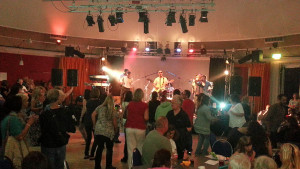 Liquidators AKA had the audience dancing all night.

I didn’t review them before the gig because I couldn’t find any good quality recordings of them online. What a superb party band they are. Obviously the AKA gives the clue that they are a Ska band. The affectation seems to stem from The Specials who had to add AKA because there was another band in the USA of the same name. As it happens they renamed the band “The Liquidators” adding the AKA after some line up changes but they could just as easily have called it The New Liquidators, but that wouldn’t be “ska” would it?

The Sunwest audience were on their feet from the off, and one or two were leaping about like loons for most of the night. I don’t know how they manage it. Me? I tapped my foot a fair bit. You may consider this my highest form of physical praise.

Musically they were tight and polished. If I have a criticism it is simply that each tune sounded a lot like the one before it, but maybe with more familiarity that opinion will change.