Learn all about bees and honey
at this long running attraction 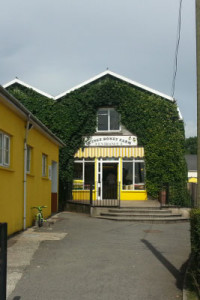 My daughter has been nagging us to take her to the honey farm for ages now, and with the summer holidays more than half gone it was high time we did. 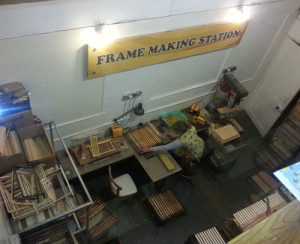 Watch people working on each stage of the process.
This lady was making frames for the honeycomb.

There were mixed reviews on Trip Advisor ranging from five star to one star and some of the comments almost put me off. As a result we decided, since money is tight right now that I would just take Ellie, and keep the costs down as much as possible.

To be honest, Trip Advisor is a dangerous tool, sure you can get forewarned about possible holiday disasters, but you are going to take on board the opinions of people who may be completely different to you. 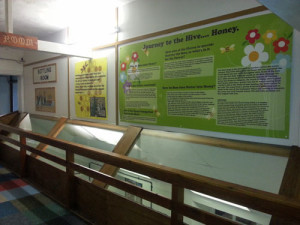 A lot of information is presented on display boards but it is well written and laid out, and is not the only source of information.

One of the negative comments said  “It is so old fashioned and the way the information is delivered i.e. posters and displays on walls does not engage with young children. ”
Well when we went there, (only one month later) we found there were flaps to lift to find answers to questions. I doubt very much if this was added recently so, presumably, they missed that as they rushed round. 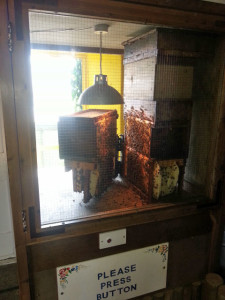 There were several different types of beehive and some of them could be opened by pressing a button which controlled a motor. Exactly the sort of thing kids love.

There were numerous different types of beehives, with active bee colonies, some of which had buttons that you could press and a motor would open the hive for you to see inside.

There was also a film that you could sit down and watch although we didn’t bother.

I even learned stuff myself, because I was there talking to my daughter about it, and reading the information to her. She had a booklet with quiz questions to answer, as well as mazes and puzzles etc, a really well thought out booklet, although she isn’t much into writing so that ended up being done mainly by me. Did you know the honey is extracted from the comb in a centrifuge? I didn’t. 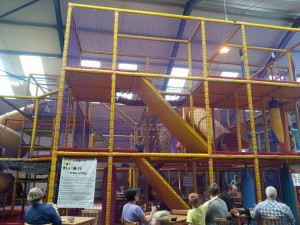 Soft Play area. Included in the entry price.
Fairly substantial play area with no time restriction.
Socks must be worn but can be bought for £1

Sure it wasn’t the science museum, and certainly not Legoland; but there was enough to keep my seven year old daughter occupied for the best part of an hour, and that is not counting the soft play area which was pretty extensive and included in the entry price. (£5.25 children; £5.95 adults) I might add, the soft play area had no time limit. 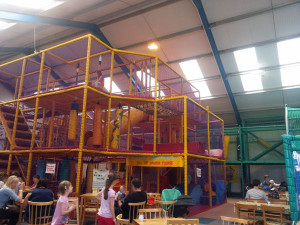 Soft play is quite large, as you can see, I couldn’t get it all into one shot.

The cafe smelled wonderful but I avoided the temptation to eat there as prices were typical for this type of attraction. I did have a decent mug of coffee (£1.90) and I got a jug of squash for Ellie which filled up at least four glasses (£2.05) 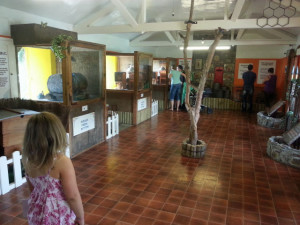 I also learned that humans have been climbing up to collect honey since before written history. Of course I should have known this since most primates do so, but I didn’t realise there were cave paintings and carvings dating back thousands of years depicting the activity.

In the shop they sell a wide range of honey and bee related products, as well as socks, which is thoughtful, because many children will arrive in sandals, but have to wear socks on the soft play. My daughter included.
We bought socks, a large jar of heather honey (£4.50) a jar of honey marmalade (£3.50) very nice, and a beeswax tea light 65p.
I wasn’t willing to pay four quid for a candle shaped like a Christmas tree, but then I wasn’t buying gifts for friends back home.

All in all, I would say it is certainly worth a visit with most age groups of children. It is tolerable value at just over £22 for a family of four (children are ages 3-16) although, if you are on a tight budget, make sure you feed everyone before you go, so they aren’t hungry; and maybe show them the price of a jar of honey in Tesco for comparison first.

NOT IN ANY ORDER

Watermouth Castle
Situated on the outskirts of Ilfracombe, in Berrynarbor this imposing 19th century castle houses a slightly eclectic mix of animatronics, models, Victoriana, etc. The dungeons contain some moderately grisly displays that may frighten younger children. Outside in the attractive grounds there are various areas including Gnomeland, and Fariground rides, which will appeal more to younger children.
Tunnels Beach
You have to pay to go onto this beach but it does boast a tidal pool with lifeguard cover, daily cleaning and no dogs, rock pools, play hut (additional charges apply), cafe and beach shop.
Combe Martin Wildlife and Dinosaur Park
Close to the village of Combe Martin, a short drive from Ilfracombe, is the Wildlife and Dinosaur park; featuring a range of animal exhibits, including lions, wolves (made famous by the “Wolfman” documentaries featuring Shaun Ellis) as well as animatronic dinosaurs and other attractions.
Chambercombe Manor
An 11th century manor house which, it is claimed, is one of the most haunted houses in England. The house boasts many original features and antique furniture from various periods. The grounds are free to visit, although donations are welcomed.
Walkers Chocolate Emporium
“It’s just a shop” exclaims one detractor on a popular tourist ratings site. Well what did you expect from the word “emporium”?
Anyway, it is not just a shop, there is a life-sized chocolate man and a number of other exhibits related to the subject of chocolate. Also they make the stuff on the premises and sell a wide range of chocolaty things to satisfy even the most ardent chocoholic.
Ilfracombe museum
An eclectic collection of natural history, such as butterflies, bats, skulls and bones. There is a Morse code machine and brass rubbing that the kids can get involved in, and a local family history section, as well as a gift shop and much more besides. Great for a rainy day.
Ilfracombe aquarium
This small but well managed aquarium displays aquatic life in various sections representing a river system, from the small fast flowing bubbling brook at the top of the watershed, right down to the harbour area and out into open ocean. All laid out so that you walk in a logical order following the river downstream to the sea.
Bicclescombe Park (FREE)
The largest park in Ilfracombe, with landscaped grounds, a children’s play area, Victorian flower beds, sensory garden, a restored corn mill, tennis courts, and a pond AND lake. And it’s all free. There is also a tea rooms which obviously isn’t.
Hele corn mill and tea rooms
16th Century Grade II listed water mill, now a working museum with guided tours. A fully restored Blackstone mill is used to grind corn and there is a fully working 1920s National Engine. There is also a gift shop and tea rooms. All weather attraction.