A cheap half day out for the kids 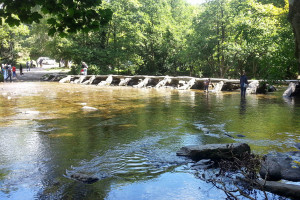 Tarr Steps, “clapper” bridge.
According to Wikipedia The name “clapper bridge” comes from the Medieval Latin “claperius” which means “pile of stones”.

It’s just  in Somerset, but it is within an hour’s drive of Ilfracombe, going through Combe Martin and across Exmoor.

The Tarr Steps is not made of tar, and it isn’t steps. It is actually a bridge made of large flat stones. 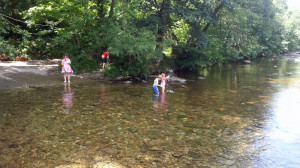 Wellies or crocs recommended, plus a change of clothes or some towels at least.

The bridge is approximately three thousand years old. Originally built by the Devil for a bet (at least according to legend)

It has been damaged by flooding several times most recently last year (2012) after which is was rebuilt by a team of seven men, and in 1952 when it took fifty sappers from the Royal Engineers to rebuild it. The advantage of modern heavy lifting equipment presumably.

Here’s a short video about the rebuild.

The stones are all numbered so that future rebuilds will be less difficult.

The bridge crosses the river Barle which is a tributary of the Exe, The water is shallow during dry weather and passable by off road vehicles.

Visitors are directed to park in a car park (£2 flat fee all day) which is a short (1/4 mile) walk from the river itself, although there is a blue badge car park at the bottom of the hill, and people can also be dropped off and picked up if the walk is too much for them. There are toilets at the car park. 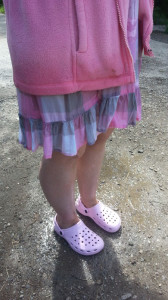 My wife fell in but unfortunately I wasn’t filming her.

There are no litter bins at all here, nor are there any dog poo bins. Visitors must take litter away with them but there is no problem at all with dog poo providing it is not bagged, or deposited near the paths or in the river.

There is an ice cream kiosk, we didn’t dare ask the prices, and a tea rooms with pleasant garden. Sorry, but again we didn’t enquire about prices. We decided that it was bound to be expensive and so we brought a picnic lunch.

As well as the bridge and the river, which the kids enjoy splashing about in (wellies or crocs are strongly advised as well as a change of clothes for when it all goes wrong!) there is also a very pleasant footpath and bridleway through the woods which eventually reaches Withypool .